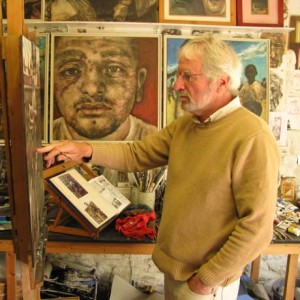 Peter Ross is a Welsh artist living in England and currently producing paintings about his childhood in South Wales in the 1950’s and 60’s.

Peter was born in Llanfrechfa, South Wales in 1941. He grew up in Newport and studied at Newport Art College from 1958-62 and then at Bristol art College from 1962-63. For most of his working life he worked as an art teacher in secondary schools and before retiring in 2007, as an art technician. He now teaches life drawing to adults and exhibits his work in galleries in England and Wales. Since his time as an art student Peter has continued to paint for himself. He has always chosen themes which appealed to him at specific times such as conflict, journeys, faces and cultural/literary figures. Each phase of interest and painting usually lasting one to two years and resulting in an exhibition before starting on the next subject of interest.

Peter’s work has been mostly narrative-based or representational, with one abstract phase immediately after leaving art college. In recent years his interest has returned to his childhood and his memories of Newport, South Wales. These paintings are based on family and archive photographs, memories, research and other influences like Dylan Thomas.

Peter has had numerous one person and joint shows. His has also taken part in the Royal Academy Summer Show, The Arts Council of Wales, South Wales Group and Welsh Artist of the Year Show 2008.

His most recent exhibition was Memories of a Newport Childhood at The Riverfront Gallery in Newport, 23rd July – 21st August.

His work can also currently be seen at the Ardent Gallery, Brecon and the Nick Holly Studio Gallery, Swansea.